Karen Elliot BEM, age 32 😊 (my birthday is the 25th June, so I have ‘half a Christmas’ each year and stopped having birthdays some time ago 😊!)

I am honoured to have served in the Wrens from July 1984 to April 1989 as an RP (radar plotter) – right decision to leave at the time, but always felt I left too early, and that’s why I love being involved in various Service-related activities now (putting a wee bit back for the excellent grounding I received in the Wrens), including:

I’m a wife, mother of 2 girls, Nan of 2 (girl: 7 and boy: 6), and I work full-time (condensed into 3 days per week) as a Business Compliance & Contracts Manager for a private Fife-based firm, Singula Decisions Limited, and am also the Treasurer and a Congregational Board Member of my Church, West Kirk of Calder.

I was deeply humbled and honoured to have been recognised in the New Year Honour’s 2021, having been nominated by the RNA, my citation reads:

Life is crazy busy, but generally, I love what I do and do what I love – a very fortunate position to be in 😊

Once a Jenny Always a Jenny! 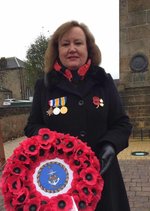 I joined the Wrens in 1977 at the age of 17½. I was in part 2 training as a Radio Operator at HMS Mercury during the Queens Silver Jubilee and I  was too young for a tot of rum when they announced Splice the Mainbrace so I was entitled to a pint of lime juice…sad but true!

I served at HMS Warrior (Northwood) working for NILO

(National Intelligence Liaison Officer). This is where I meet a smooth talking sailor who later persuaded me to marry him! From there I was drafted to HMS Gannet 819 squadron and then onto AMTE( Admiralty Marine Technology Establishment)  Teddington. While based here I married the aforementioned sailor and promptly fell pregnant leaving the Wrens in 1981 to have our eldest son Michael. I then became a “stay at home Mum” for the next 10 years adding another two sons Richard & Stuart to our family. Clearly bringing up 3 boys  mostly on my own while Dave carried on serving wasn’t enough so I undertook a series of voluntary roles. While married accompanied in Hong Kong I taught English in a local kindergarten, while living in Portsmouth I was a fundraiser and volunteer with the RNLI, then returning to Scotland I became involved with Guide Dogs for the Blind and later I was a Producer and Presenter with Hospital Radio at St. John’s Livingston for a number of years.

When I eventually returned to work I was a senior manager at Sky TV for 14 years, I have also worked with a Telecoms maintenance company and most recently with the Lothian Armed Forces and Veterans Project.

Still keen on volunteering where and when I can I am an active campaigner and fundraiser for CRY – Cardiac Risk in the Young, a Trustee on the Board of Lothian Veterans Centre as well as being actively involved with the Edinburgh Branch of Royal Naval Association, Edinburgh and District Branch of the Association of Wrens and the Livingston Branch of Legion Scotland. 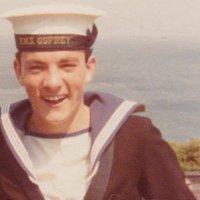 Hello, Karl Cleghorn.  I joined the Fleet Air Arm of the Royal Navy straight from school in Wallyford/Musselburgh on 8 July 1975 as an Junior Electrical Mechanic (Air) 2nd Class, the alternative that my father decided was not for me,  was as an Apprentice Electrician down the pit – Thanks dad, that was a good move!  The next 20 years were interesting….  HMS Ganges to HMS Daedalus & HMS Osprey  - learned my basic aircraft skills, then during the hot summer of 1976/77 went on a ‘beat up’ course to become a RN Commando and somehow found myself working ‘overseas’ in plain clothes, had a mishap or two  = Return to Unit (RTU) and spend late 1977 and all of 78 on HMS Ark Royal until it decommissioned as a greenie on 892 Squadron servicing F4K Phantom Jets – which was really scary stuff, but great travel and adventure.  Back to plain clothes and more specialised specific (non RN) work in 1979 -82, interspersed with returning to learn to fix RN Wessex helicopters, 707 & 845 Naval Air Squadrons (known as the ‘Junglie squadrons’).  In 1992, having completed my ‘survival instructor training’ for 4 months in Norway and with one days leave back home, found myself on Ascension Island and heard on the BBC World Service about the Argentines making a big mistake further south = busy 3 months thereafter making my small contribution to Op Corporate.  Returning back to HMS Heron and the final plain clothes duties, again getting into hot water, sent to ‘cool off’ at sunny Lee on the Solent and the Fleet Air Arm Field Gun Crew in 1983.  PO’s Course, more malarky with specialist units, final RTU, and then i/c Station Electrical workshops seen me (somehow) get ‘my buttons’ in 1986 and promoted to the following year to the Officer Corps and jobs with the RFA, Combat Survival Instructor (Jungle & Arctic Warfare specialist) and then back to sea 1991 – 93 onboard the ‘new Ark Royal’, finishing with an 8 month stint in ‘the Former Yugoslavia’ before early retirement on 30 November 1993. Then joined Lothian & Borders Police - the following 21 years were again interesting and mainly dedicated to ‘keeping the Peace’ in large, run down council housings estates in the west of Edinburgh.  Firearms teams and Public Order (riot squad!) teams and then finally moving ‘off the street’ to organising and taking part in all manner of public, military and royal events from 500+ football matches, Rugby Internationals, Pop concerts, Gala days…. to every year of my service working the Royal Highland Show and Edinburgh Military Tattoo. By now completely knackered out and early in July 2015 – Job(s) done, nigh on 40 years of uniformed (and a bit of the plain clothes) duty completed.  2 pensions Cleghorn = happy Karl!  Cheers.